The Chalice Symphony is a quartet of instruments I designed for a performance with Cold War Kids as a commission from Stella Artois. Each instrument uses Stella Artois's iconic chalice to make music in a different way — bowing them, striking them, using them as tuned resonators, or using their shapes to form vowels in vibrating columns of air.

They are designed to musically complement each other with a variey of timbres, pitches, and expressive features. I designed three of the four instruments to have roughly the proportions of a person so they would feel like a family of characters. Here is the little family together.

The Pyrophone works a bit like a pipe organ. It has long, carefully-tuned tubes which resonate at specific frequencies. In an organ pipe, the initial turbulent energy comes from a reed or from a whistle-like structure called the mouth. But in a pyrophone, it's the flame itself that vibrates — much like the reed of a saxophone. It's a uniquie oscillator that produces a uniquely deep and rich sound. 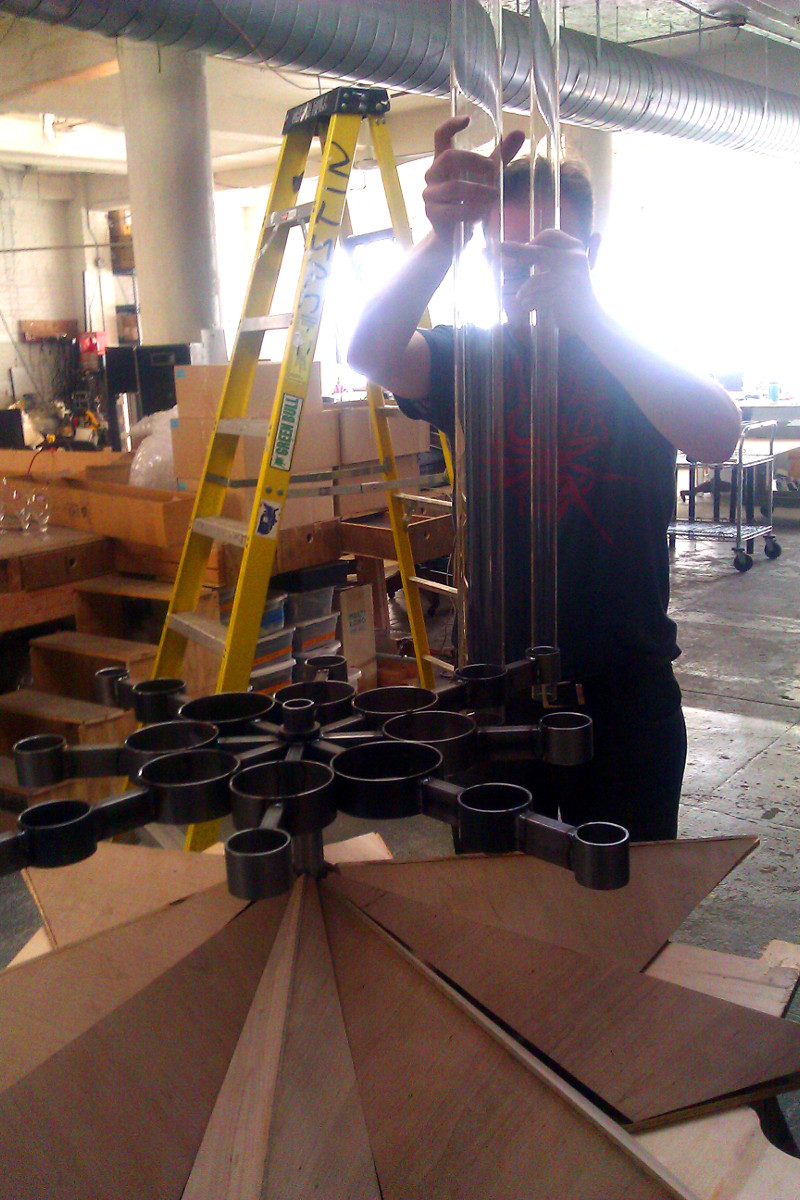 All Assembled in the Studio 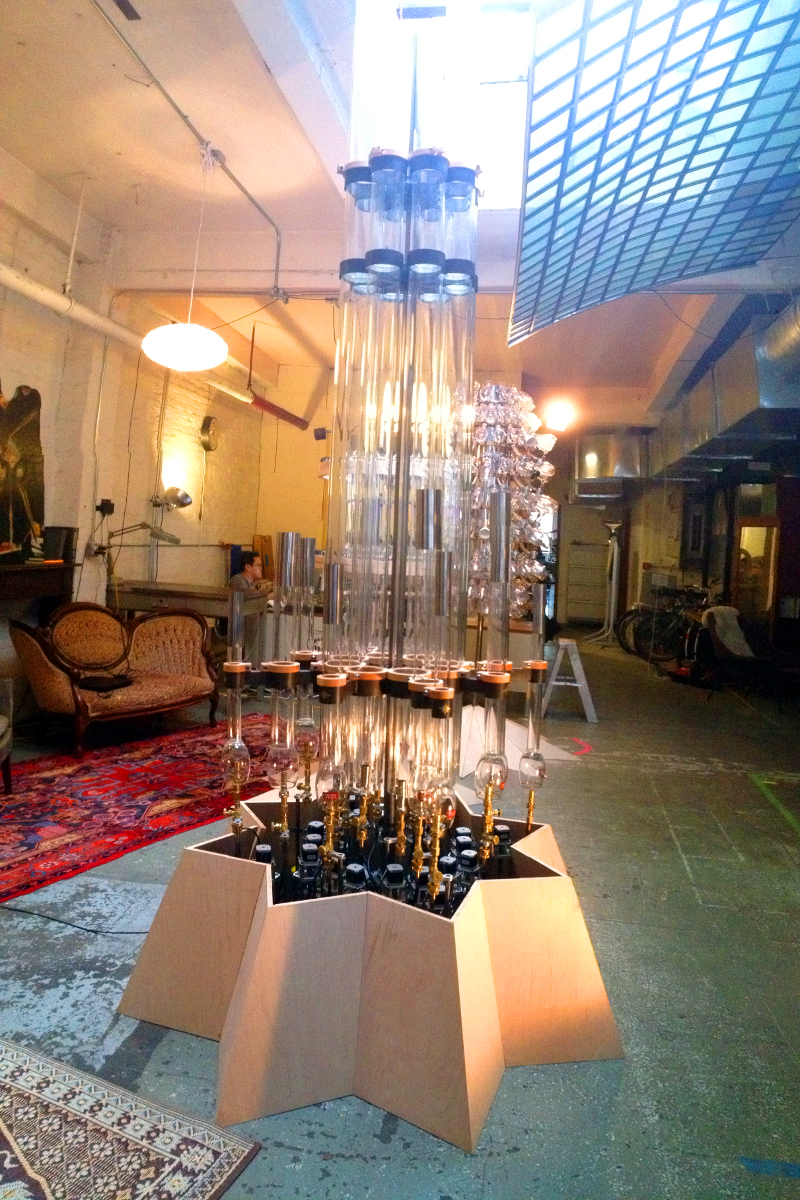 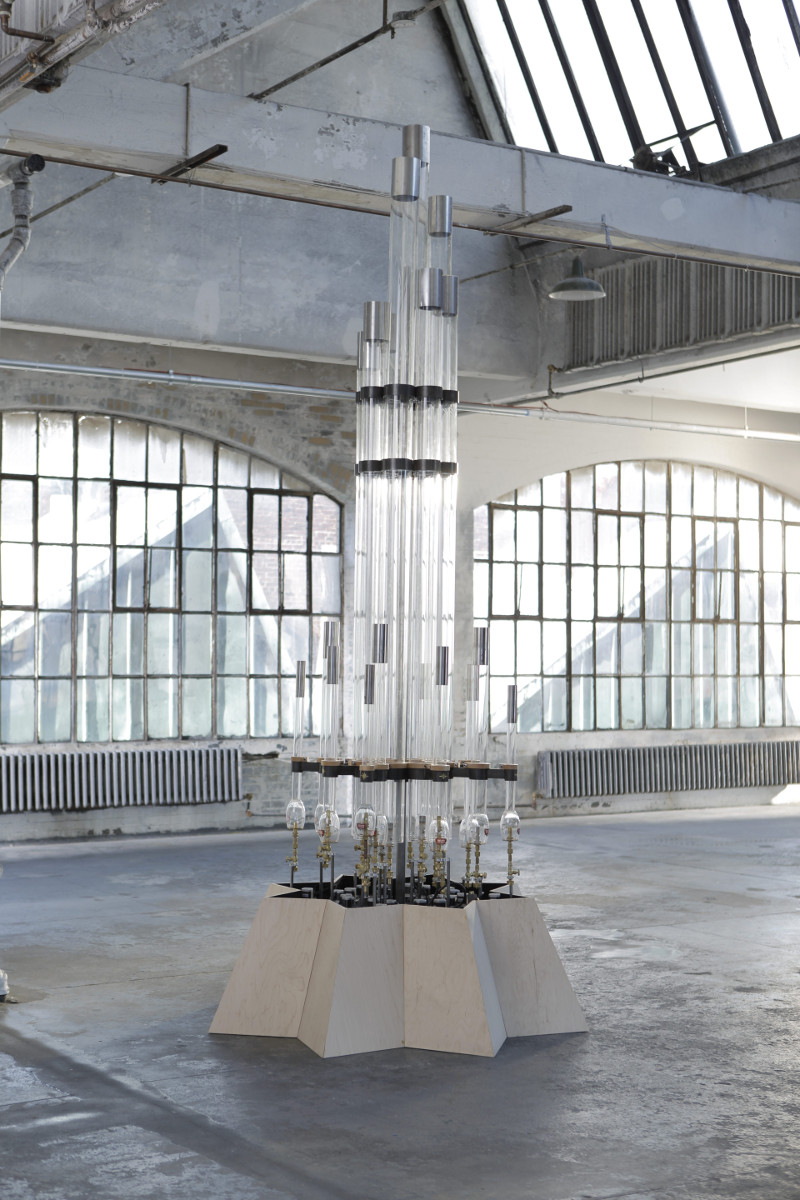 
Much like early humans, our first challenge was learning to control fire. Karl did a brave job of creating electromechanical valves to control the flow of low-pressure propane gas. We learned that we would need high pressure gas to make these tubes sing — and that controlling high-pressure flammible gas with homemade technologies was too dangerous for even us. 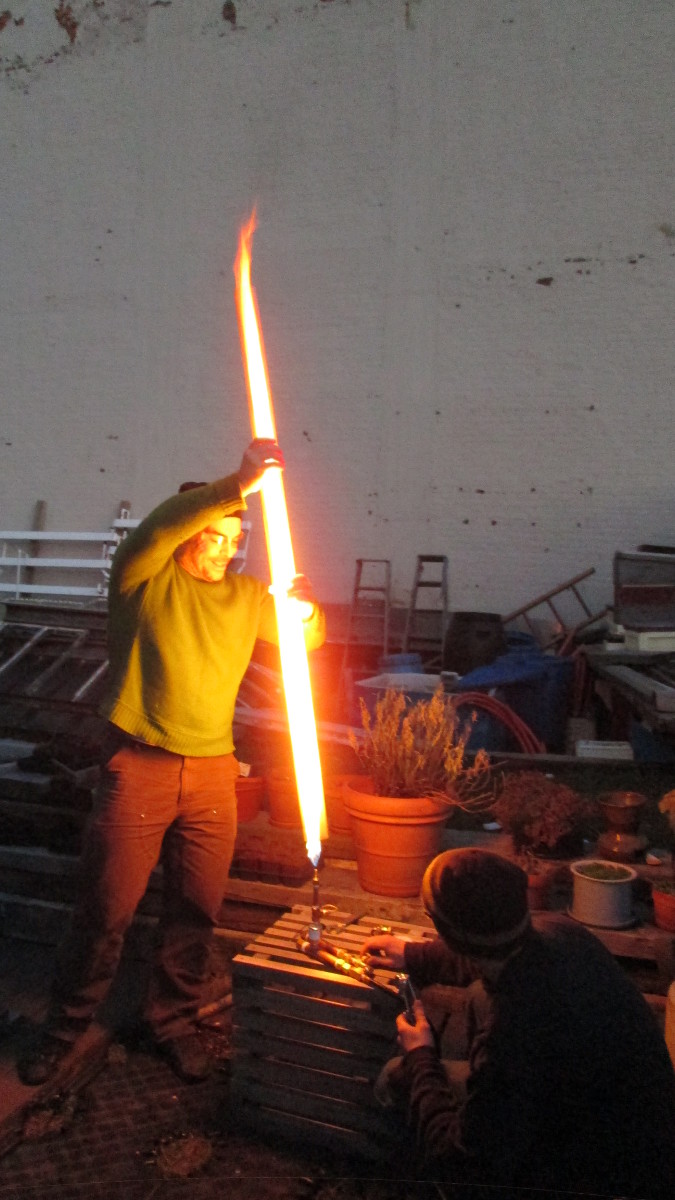 The Hupfeld is named in a tribute to the inspirition behind its circular bows — Ludwig Hupfeld's Hupfeld Phonoliszt Violina, a violin-playing player piano from 1907. 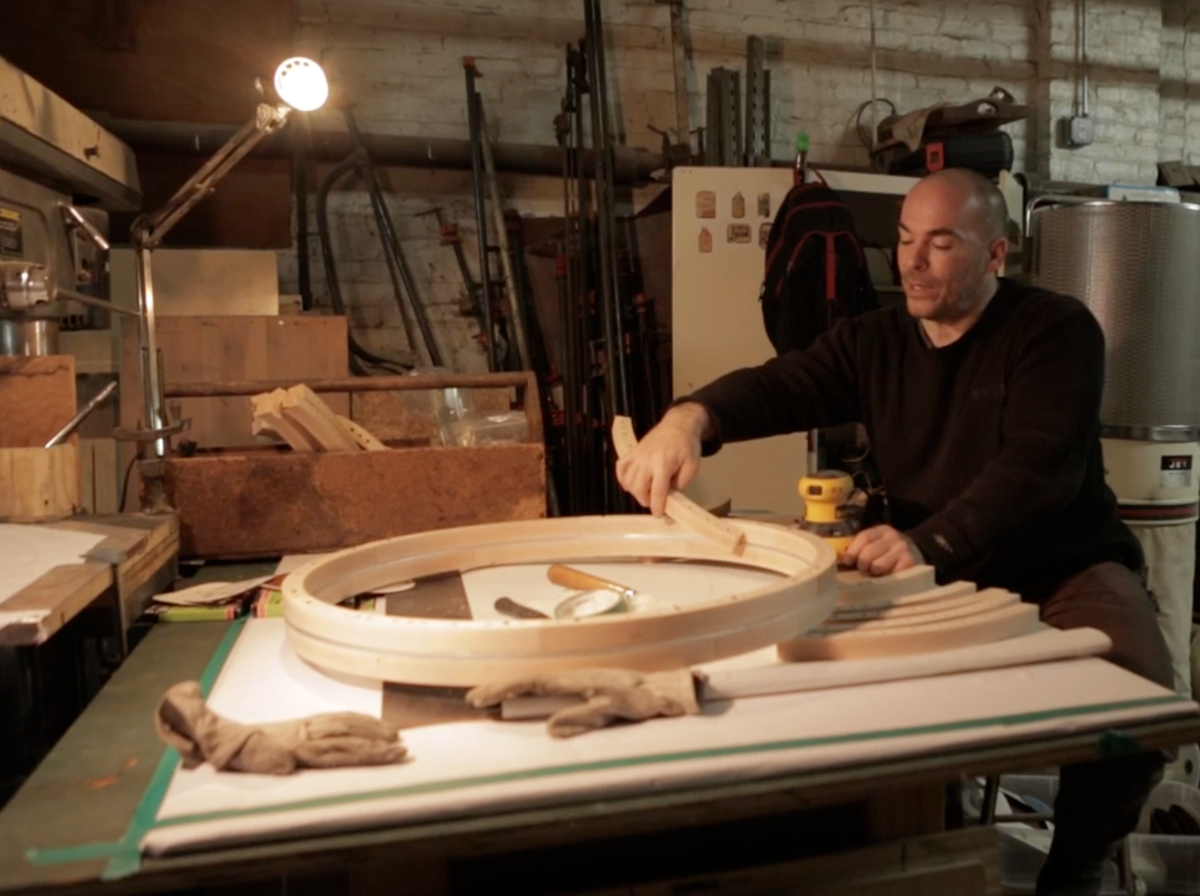 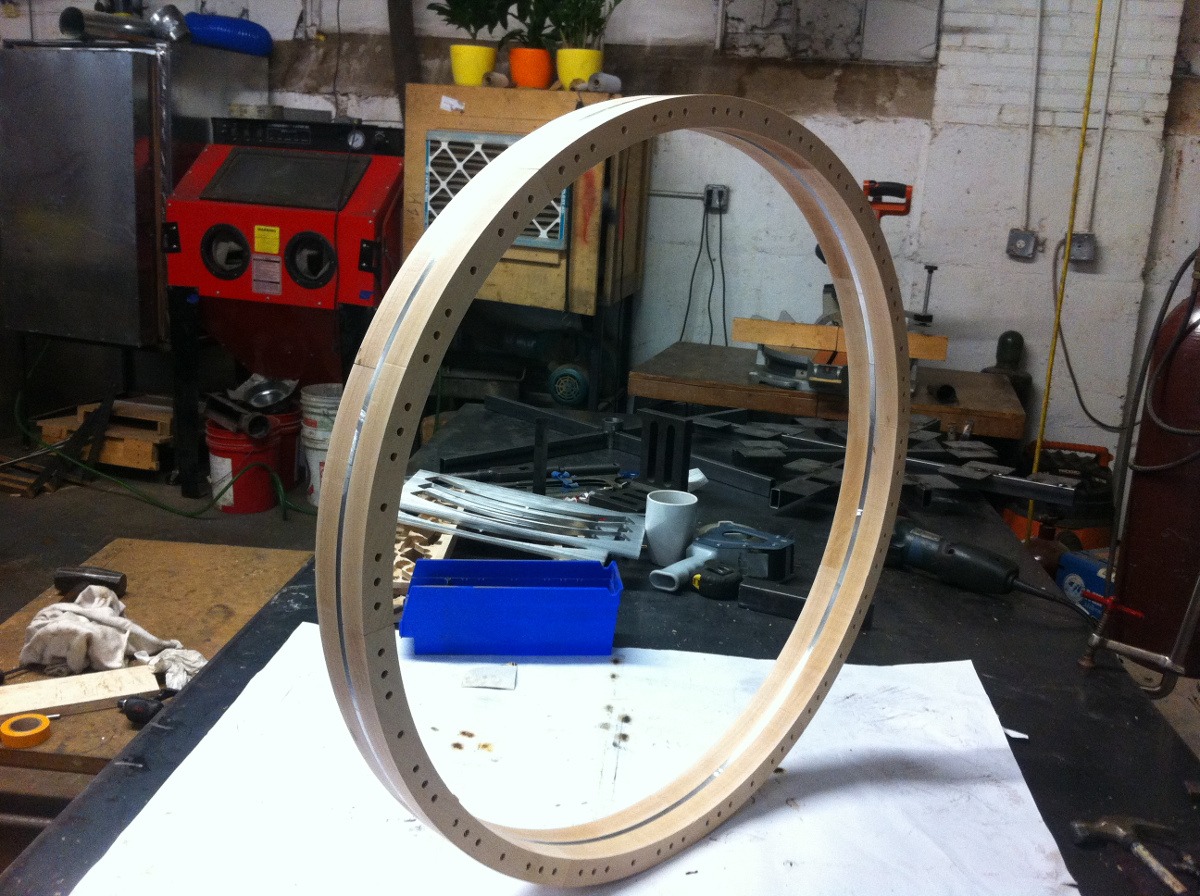 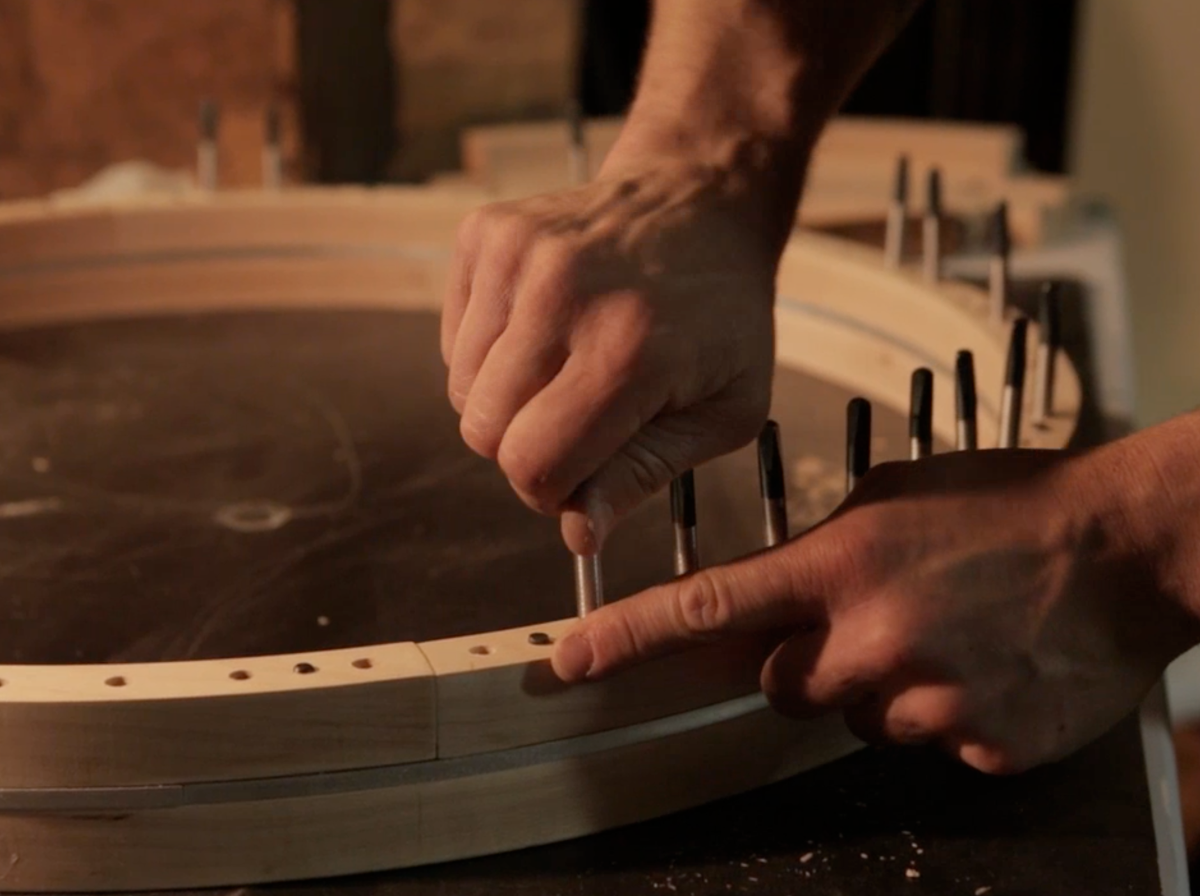 
Here is its first motion test before all of that glass was added.


Each of its eighteen chalices has three distinct voices, depending on how it is bowed. The performer can play an octave and a half of pitched and can control the speed and pressure of the bow to change the voices and timbres. So one note can be stretched out into a highy dynamic phrase. And notes can be combined into shimmery chords. 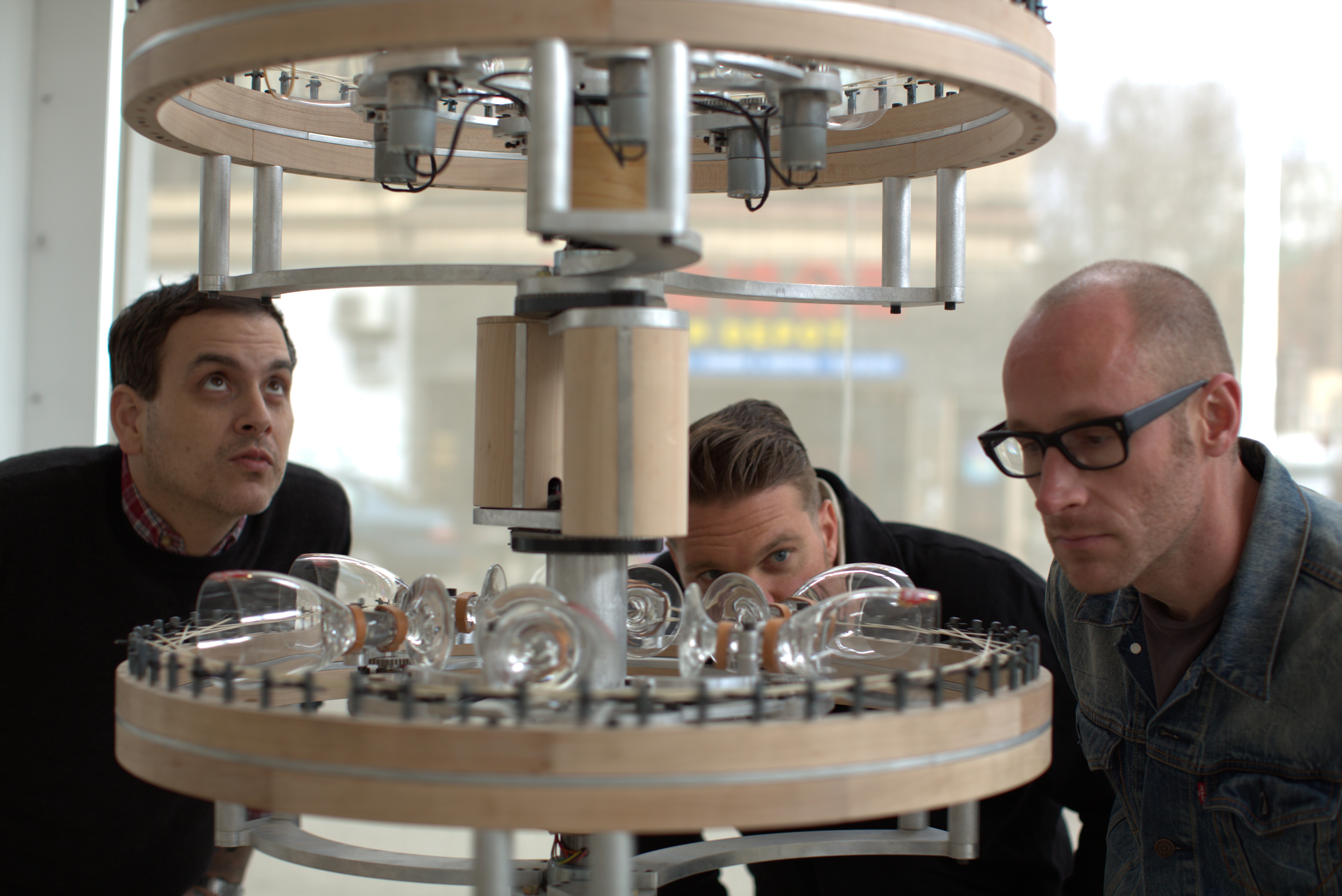 The Hive creates music with glass bells made from Stella Artois chalices. They are played with electronically actuated piano hammers, which support loud and soft playing. An octave and a half of steel bells are added for extra timbral range. 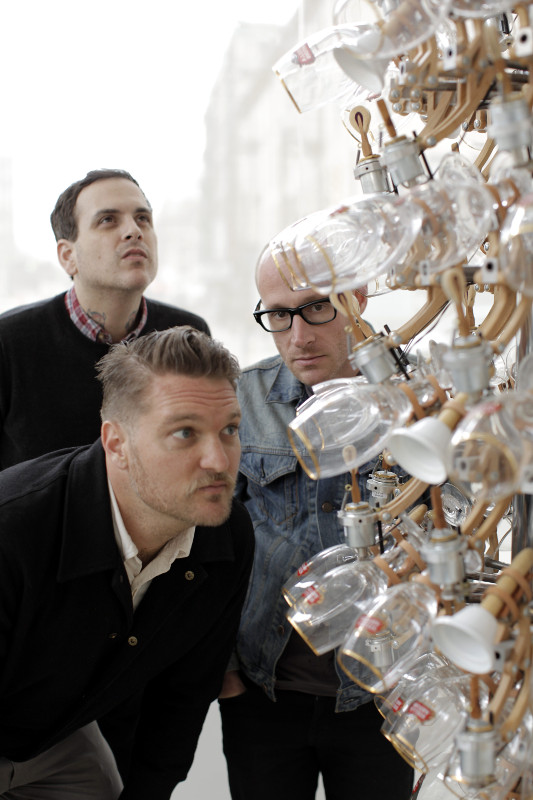 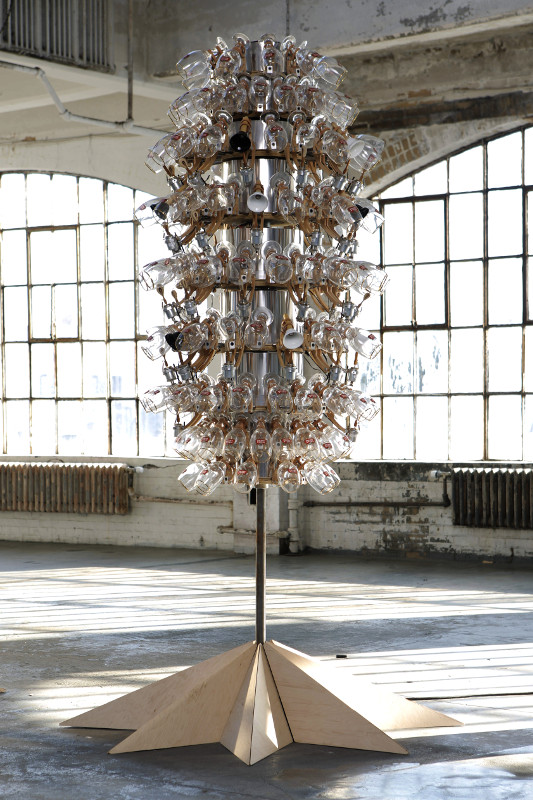 Wake Up and Smell the Hive 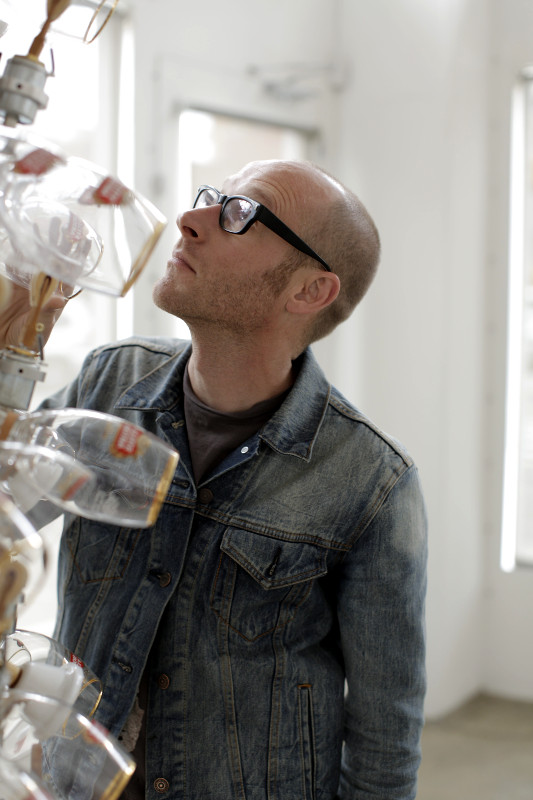 
This video shows a late-night musical test of the Hive's electrical systems.

The music is an arbitrary test sequence but sounds delightfully creepy. 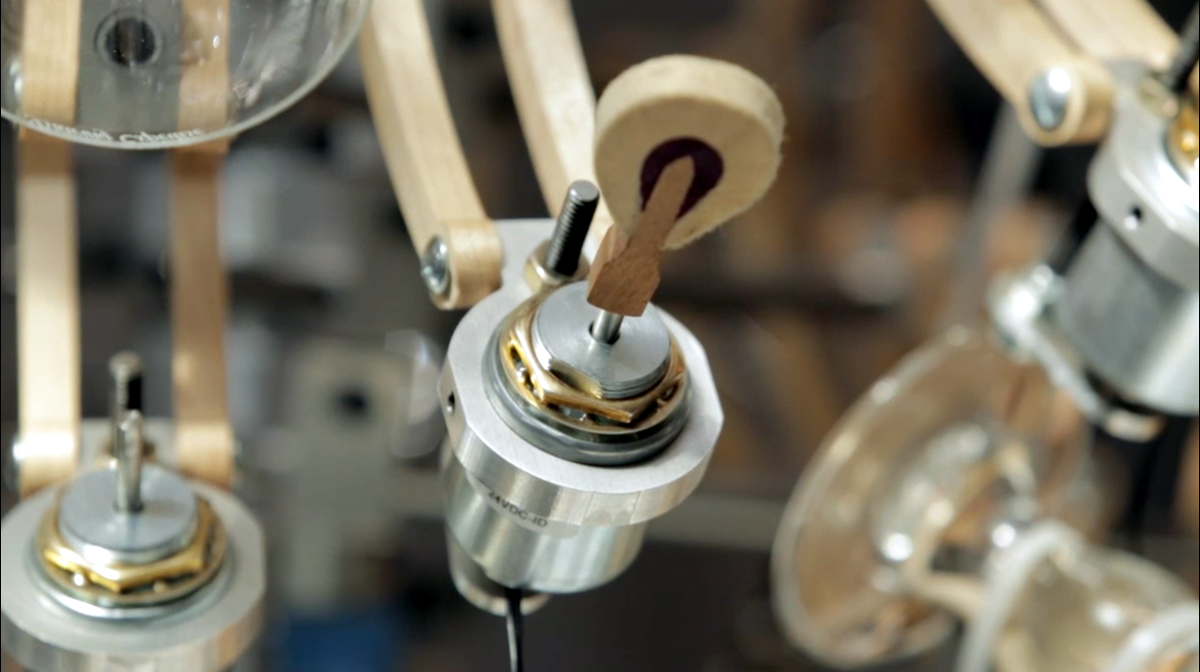 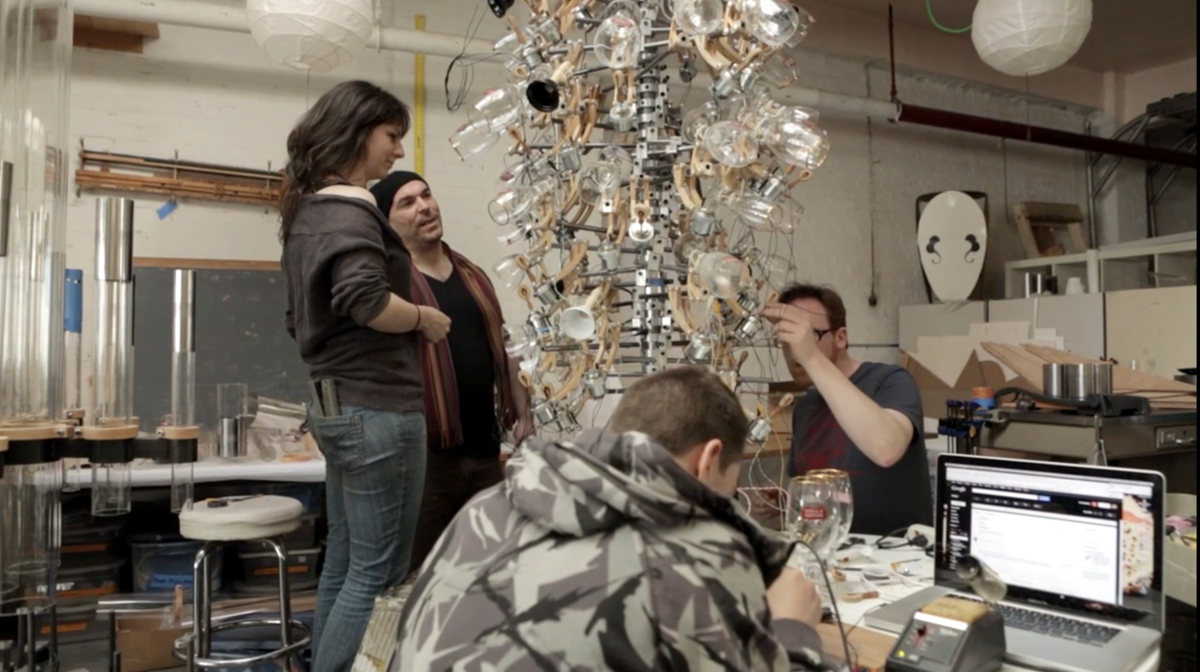 A Forest of Wiring 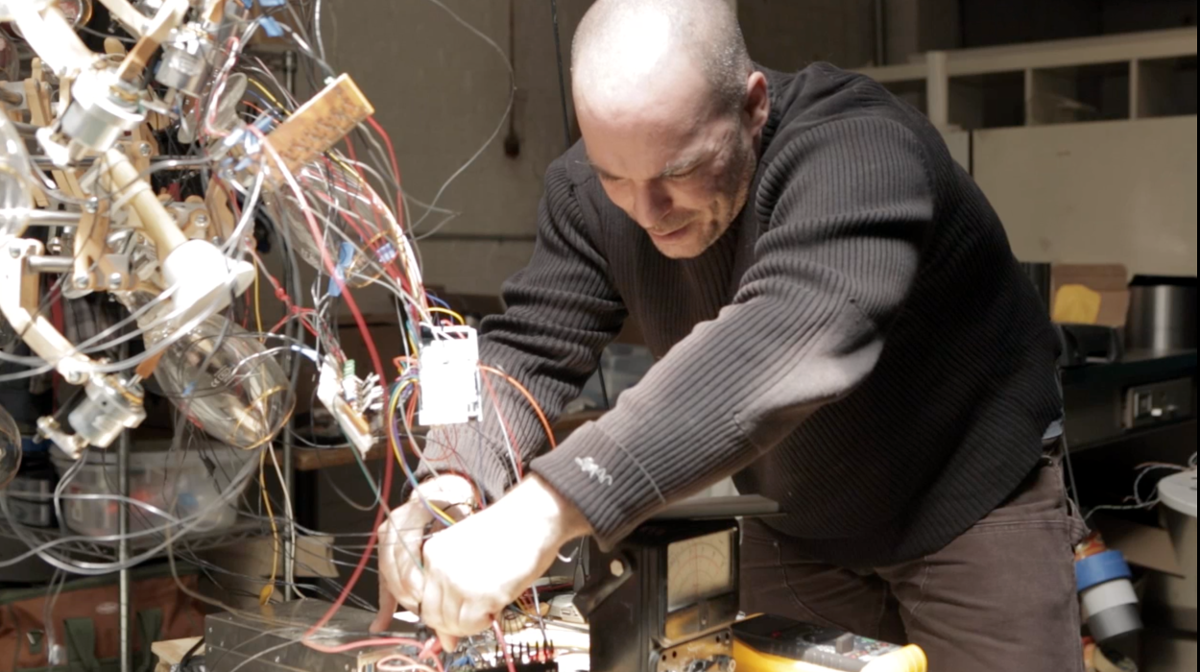 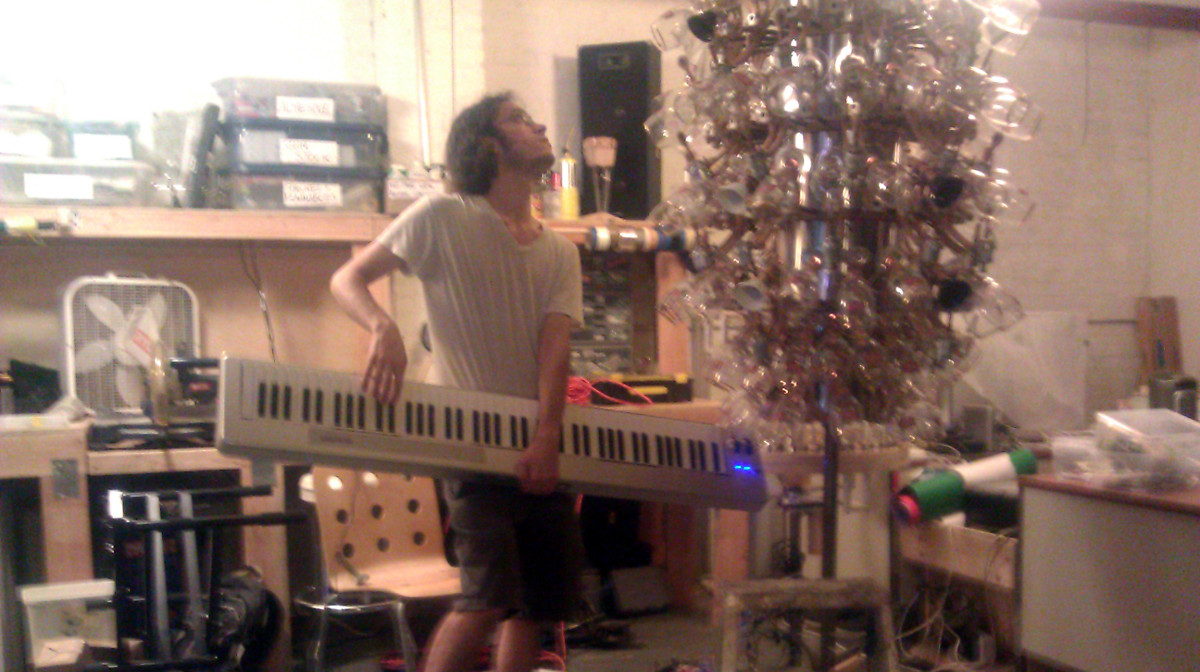 In honor of the Stella Artois star, the Star Harp is a self-playing harp inspired by orreries, old mechanical models of the motions of the planets around The Sun. It uses the stem of the chalice as a bridge and the bowl as a resonator.


All of this precise machinery was built in an old-fashioned DaVinci mode. Everything was made with hands, drawings, calculations, and custom-made tools. Here, Marina is making the insides of the gears perfectly round. 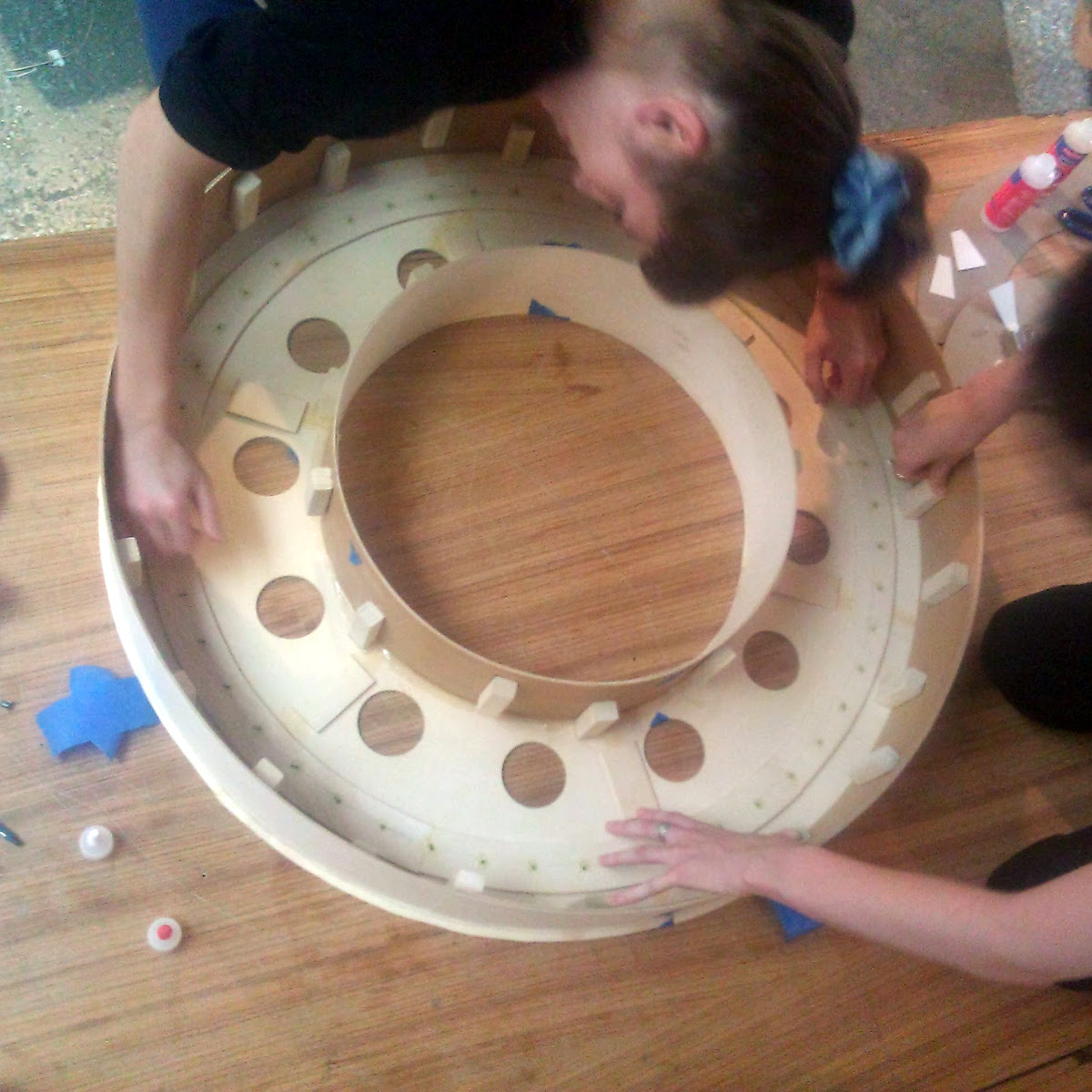 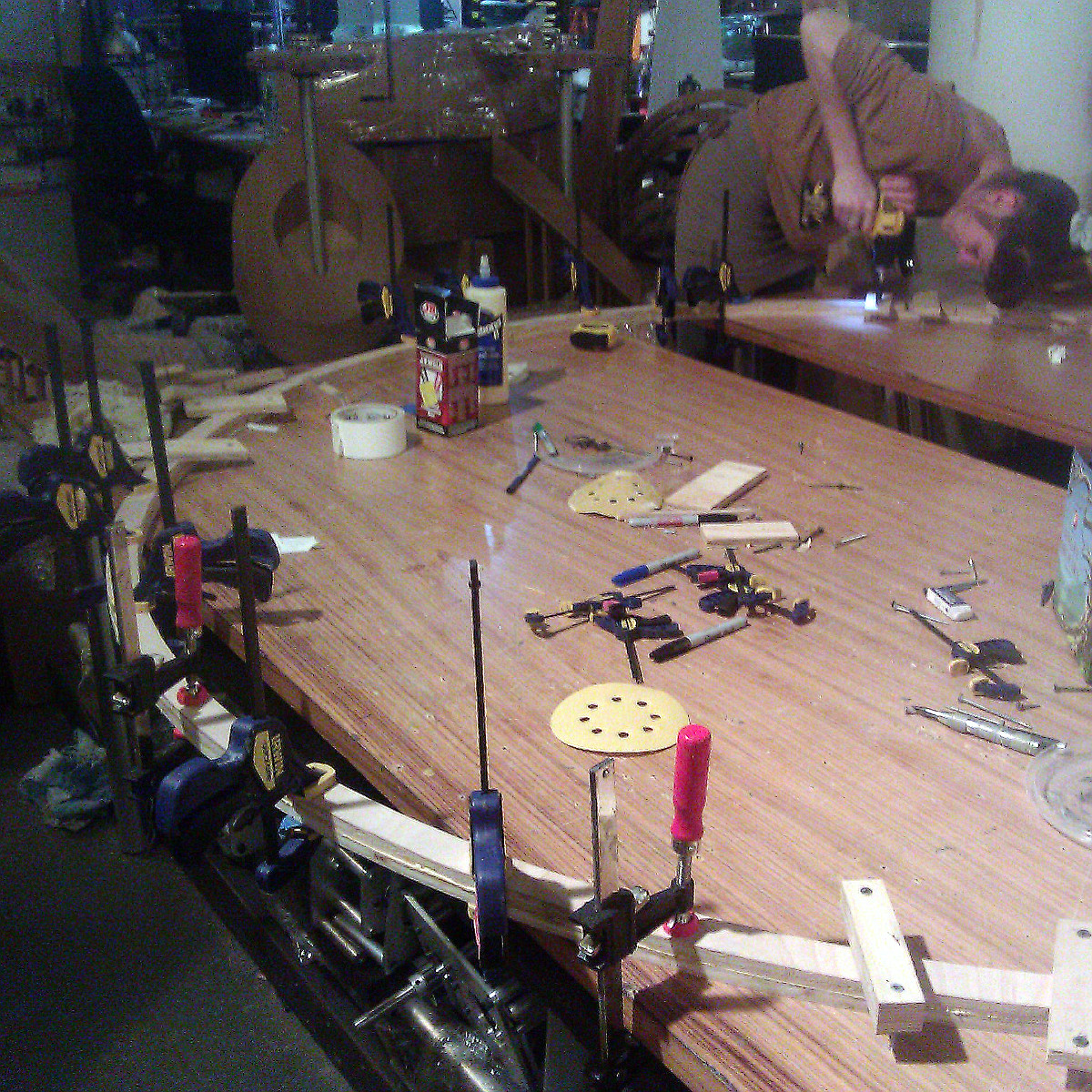 
The Star Harp was the most complex instrument in the Chalice Symphony. Fifteen concentric gears move independently to control five arms. Its finished version lacks proper documentation. But these early motion tests suggest how it worked.